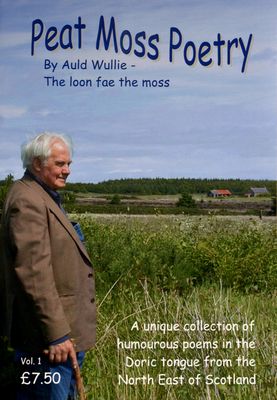 Peat Moss Poetry collects the poems of Buchan joiner Auld Wullie whose workshop and cottage with railway carriage was at the Toll of Birness by the Fraserburgh and Peterhead roads.

Wullie requested of his nephew, Jack Davidson, that his collection of Doric poetry be published “efter ah’m deid”!

Readers will be delighted with these wonderfully witty and insightful poems as a lasting legacy of this remarkable loon.

Being a well-kent face around Aberdeenshire much of his poems has landmarks as their subject and these include climbing Bennachie, Slains Castle and his favourite café, the Coffee Pot in Ellon.

Another lovely feature of Peat Moss Poetry is that it is interspersed with fond memories by Jack of his Uncle and even odes dedicated to him. The funniest is the one written after he received a parcel from his nephew that he could not get into.

Here is an example of one of his pieces of work entitled The Auld Beech Tree:

Other doric verses tackles weighty subjects like what keeps the Pope’s bunnet on when he kneels, vinegar curing swollen joints, the perils of being a geriatric joiner and why honest men die poor. 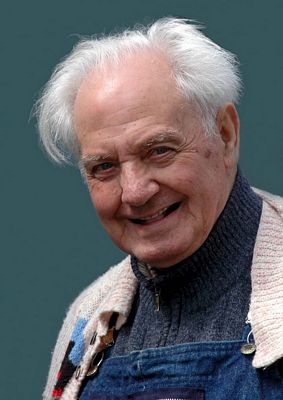 It is beautifully illustrated with some stunning photos of our beautiful countryside and some great pictures of Auld Wullie which captures his lively fun character. I particularly liked his snap by the famous red phone box which featured in the film Local Hero at Pennan and of him busy in his workshop.

It would make an ideal fun gift for those with an interest in our unique mither tongue and can be purchased at the Coffee Pot in Ellon or directly from Jack Davidson at:
"Havendale"
14 Hillend View
Winchburgh
West Lothian
EH52 6WB 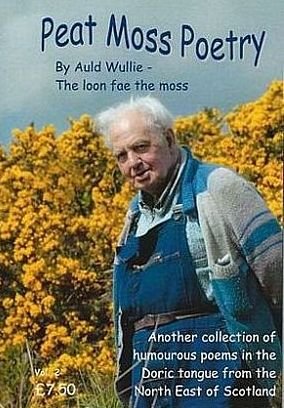 Volume 2 of Peat Moss Poetry was published in 2014 and is available from the stockists described above, or directly from Jack whose address, telephone number and e-mail are above. Wullie’s Doric Doggerel continues on a wide range of topics such as doing the fitba pools, having man flu, the difficulty of eating spaghetti, clipping his toe nails and doing the housework. His thoughts also encompass a range of political subjects such as a solution to unemployment and living in an old folk’s home.

We learn a bit more about this Buchan character in this second volume, best of all that he played football with Stanley Matthews in their early RAF days. New photos include a young Wullie Rennie in his Royal Air Force uniform.

He finds humour in so many unexpected places. For instance he describes not being able to listen to the Minister’s sermon during a funeral : Fur his verra erse wis sair!


If only he had enough faith in his talent for Doric poetry and had listened to his family and had them published when alive. I’m sure the local area would have taken him to their hearts and encouraged him to publish more and I for one would have loved to hear him recite his works in his braid mither tongue. I look eagerly to reading volume three.