Each year Inverurie Town Hall hosts a special charity fundraising pantomime that is partly performed in the Doric by local theatre enthusiasts. We've been going to it for years and it is one of the most colourful fun-filled nights with plenty of laughter thanks to the Aberdeenshire related jokes.

For more information or to buy tickets visit www.inveruriepanto.com

Be prepared to singalong! Here is an example of one of their previous fun audience participation Doric songs, sung to the tune of YMCA: 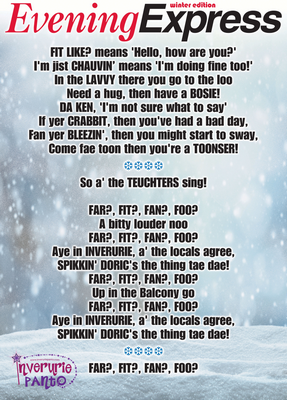 In the LAVVY there you go to the loo

Need a hug, then have a BOSIE!

If yer CRABBIT, then you’ve had a bad day.

’an yer BLEEZIN’, then you might start to sway.


So a’ the TEUCHTERS sing!

Aye in INVERURIE, a’ the locals agree

Up in the Balcony go

Aye in INVERURIE, a’ the locals agree,