A wide range of Doric books are available and below are our favourites with links to buy them at cheapest prices: 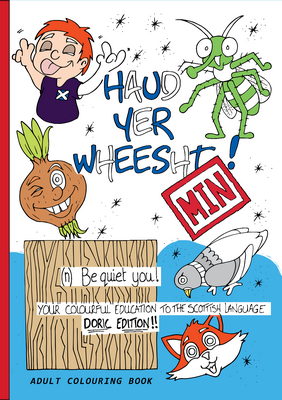 from Aberdeen's much loved BBC Radio Scotland presenter Robbie Shepherd collects his weekly columns from the local Press and Journal newspaper along with his Doric poems quotes.

This Doric book includes some fun cartoons from Graham MacLennan. Here is an extract:

She cwid still the maist noisy crood bi the sheer delivery o her wirds, wi that stracht, prood back as she sang o her ain fowk an their wyes.

by Norman Harper, a columnist for the P&J for many years, is a comprehensive A to Z of the Aberdeen dialect and slang. Sadly, like many excellent Doric books, it is only for sale in second hand shops and commands a high price, but if you can get a copy you won't be disappointed. It's packed full of full sayings like "stue and sma steens" which translates to dust and small stones and means when someone makes a hasty exit, bystanders will observe wryly that "ye couldna see him for stue and sma steens".

Another Aberdeen saying of old described in Spikkin Doric is "Tap line" which translates to pre-tax earnings and comes from the figure's position on a payslip.

Like these two examples each word or expression is followed by a description and example making this an excellent resource for anyone wanting to speak like an Aberdonian.


A Dash O'Doric. The wit and Wisdom of the North East

East brings together two experts of our unique dialect, Robbie Shepherd and Norman Harper. In this first of three volumes they collect real contributed funny stories from across Grampian.